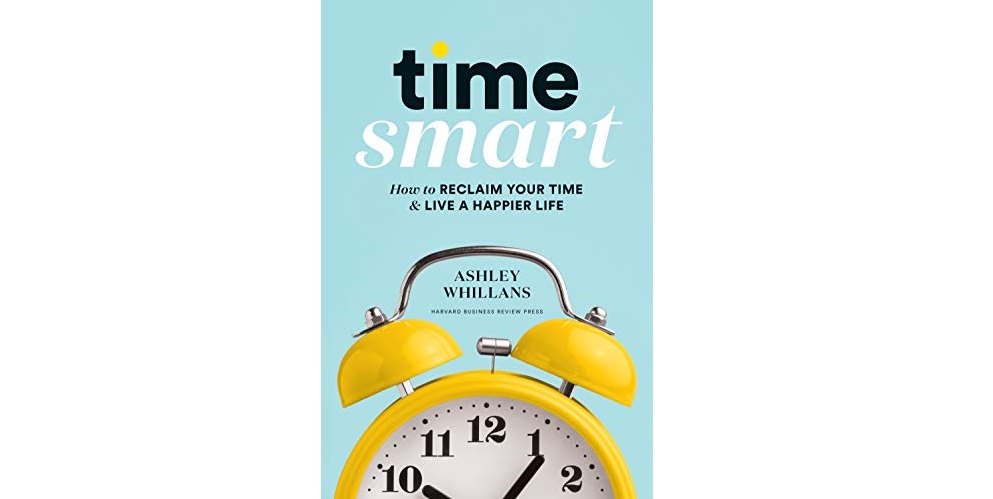 Time Smart: How to Reclaim Your Time and Live a Happier Life – by Ashley Whillans

If you ever feel like you’ve not got enough time, that you struggle to prioritise, and that the things you think of as “important but not urgent” never get done, the good news is that you’re not alone – this feeling of time poverty is endemic, and many of us suffer from it.

The field of behavioural science has a lot to say about the way that we manage our time, and how we (fail to) achieve our goals. Making a plan, with clear steps about how we’ll achieve our goals, has been shown to make a difference – to whether we achieve weight loss goals, get a job, or remember to vote.

Helpful too, is setting realistic, attainable short term goals – it’s much easier to stick to a goal to lose 5 pounds than one to lose 30. Public commitments – telling a friend (or better still, a rival), that you intend to do something – helps you keep your promise out of a fear of losing face later down the line – adding a financial incentive, like paying your friend, or an opposing political party if you fail to keep your obligations – also has an effect.

These nuggets of information might be useful, but we should avoid being too relieved. That same behavioural science literature is laced with evidence that we’re not all that great at helping ourselves, and that knowing that we’re prone to a particular cognitive bias is a far cry from overcoming it. Few books in the popular behavioural science cannot go the next step and actually provide us with the tools to make a change in our own lives, rather than awaiting a change in the choice architecture from some almighty nudger. Think Small, by my former colleagues Owain Service and Rory Gallagher, is one of the few.

Time Smart, the new book by Ashley Whillans, an Assistant Professor at Harvard Business School, is the latest book to be added to the surprisingly slender library of behavioural science books that help you to help yourself.

I’ve followed Whillans’ research for most of her career, and have always found it insightful and elegant. Nonetheless, I was sceptical about the value of this book. Whillans is a profoundly, absurdly impressive person – publishing excellent papers on a wide variety of topics, a masterful public speaker, by all accounts a wonderful mentor to junior scholars, and a generous and thoughtful collaborator. Packed into her career to date, she has achieved a tenure track position at one of the most prestigious universities in the world, established the first behavioural insights team in the Canadian provincial government of British Columbia, and has managed to squeeze in an acting career, making her (as far as I know) the only member of HBS faculty with an IMDB page. In short, me taking advice on how to manage my time from Whillans feels a bit like me taking driving hints from Lewis Hamilton (I cannot drive). The advice would certainly be both expert and excellent, but it would probably be pitched at a level not attainable to mere mortals.

I am pleased to say that my initial skepticism was wrong. Whillans research is presented in an accessible way, allowing it to stand alongside the greats of the behavioural science popular literature like the blockbusting Predictably Irrational, but it also goes further, providing easy, almost cut and out keep (or perhaps, photocopy and keep), exercises that the reader can undertake to actually manage their own time better and to move from time poverty to time affluence.

Although I might take issue with some of the stylised facts that she presents, these hardly matter. Whillans is able to take the topics she discusses beyond the dry pages of academic research, by revealing that she herself struggles with many of the same issues, and the impacts that it has had on her own, seemingly gilded, life.

To summarise, this book is well written, practical, and insightful. Instead of being given driving tips from Lewis Hamilton, I felt guided through the process by a fellow sufferer, like a sponsor at “Time Poor People Anonymous”. Despite my cynicism, I have resolved to actually undertake some of the exercises in my own life. I can’t offer a better recommendation than that.